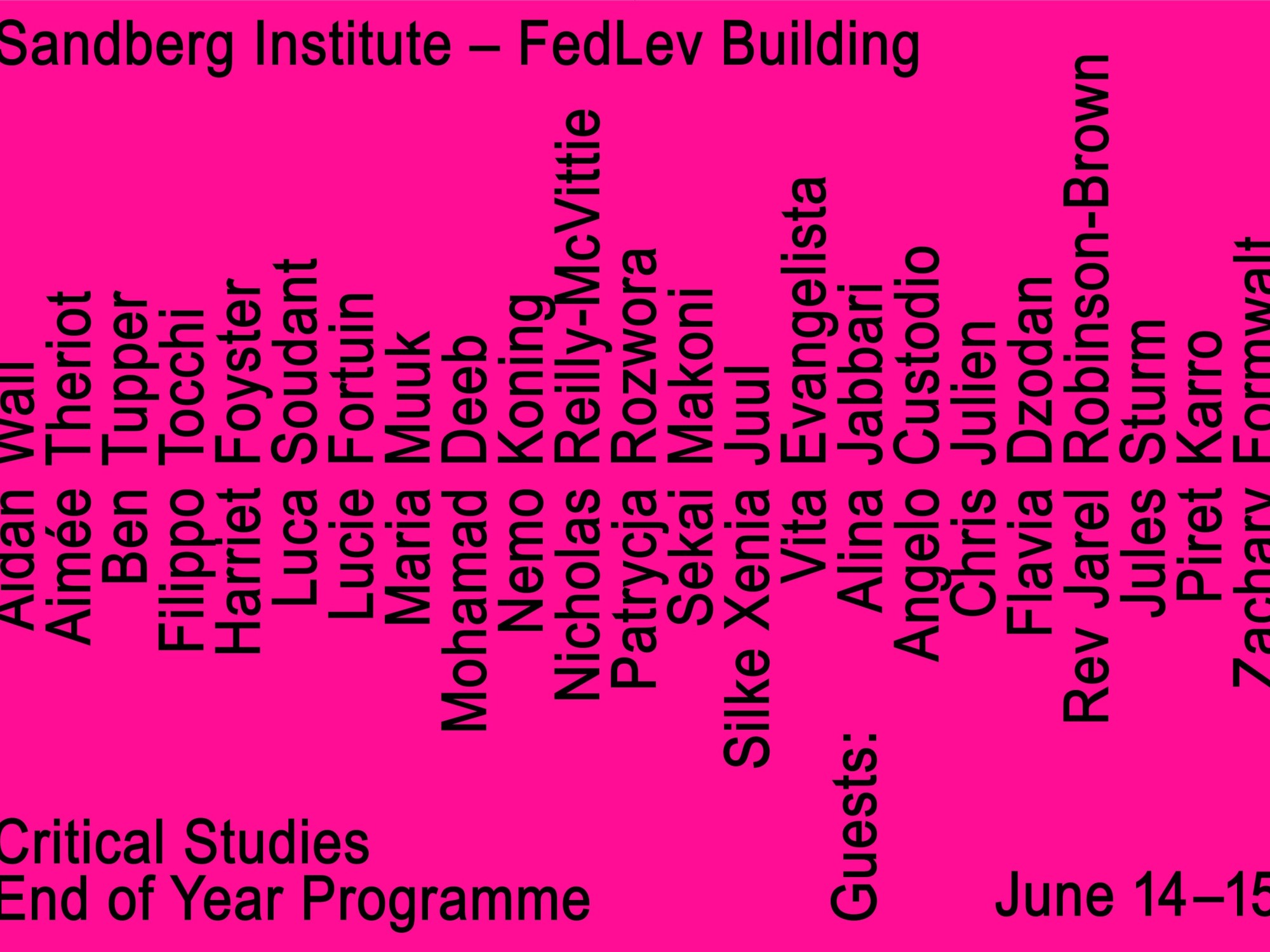 A day at the Critical Studies Department

On Friday (14 June 2019), I had the opportunity to see what the students of the Critical Studies Department (Sandberg Instituut), directed by Tom Vandeputte, had been up to. This was part of the End of the Year Programme and the public was invited for a fully-packed day of critical discussions and performances.

Even though, I am fond of art and theory, as a viewer, I was not sure what to expect and prepared myself for a long and boring day at school. Far from it, the day went like a flash. I was immersed in a communal experience unlike most things I had done in the past 5 years. The day provided me with an all-encompassing multisensorial experience very much associated with pre-modern ways of sensing, characteristic of audile-tactile traditions of tribal cultures. An art tribe perhaps? Well, back in the 1960s, Marshall McLuhan predicted the return of tribalism and pre-modern ways of sensing with electronic culture (or post-modernity). Surely, discussing the digital and criticising social media was well embedded in the programme.

And food! Yes, how can I forget food? Several of the projects touched on the importance of food as a critique of neoliberal societies and how the simple act of cooking reveals power struggles that go way back in time i.e. colonial history, slavery, etc. I began to think that someone was very hungry in the department 😉 Fermented bread (Maria Muuk), Pierogi (Patrycja Rozwora) and Taaitaai biscuit (Nemo Koning). Ah, and the lollipop! How can I forget it? Part of Mohamad Deeb’s sculptural performance, the lollipop was shattered to pieces accidentally by one of the students. I suppose, a great gathering of like-minded people without the pleasures of food is not so great after all. Food as criticism. Nice!

Meditation and spirituality were also in the programme. We were prompted to lie-down on the floor of the auditorium by Luca Soudant to experience sounds of masculinity. The noises made me feel like a paving slab being stepped on by football fans. It was doing my head in. I tried to focus on ballerinas and soft cotton instead. It didn’t work! The masculine sounds were well orchestrated.

One of the panels, organised by Sekai Makoni, discussed the place of faith in art practice and academia. It was interesting to see ‘a reversal of fortune’ concerning art and religion. In the past, churches and cathedrals provided a communal space of sociability where all social and political aspects were discussed, including art. Religion kept art under control for centuries until losing its grip on power. Now, art has replaced religion and spirituality for most people in the West. Museums and art galleries replaced the church in many cities, as a peregrination endpoint or sites of worship, and there we were, discussing religion within an art context. Ironic! But interesting, I guess.

On the comforts of home, I was immersed in a magnificent work by Harriet Foyster based on her research Dwelling as an Aesthetic Practice. She expanded upon her Poems from the Hardware Store to create a sound piece highlighting the uncritical behaviour of the middle class and its aspirational ideals. With great humour and wit, she evidenced the transfunctionality of art and showed that in every choice of colour and home furnishings one makes there is a revelation of a well-conditioned neurotic consumer willing to go the extra mile to achieve authenticity through a predetermined range of options. Entrapment disguised as beauty.

All in all, the communal experience of art provided by this day at the Sandberg Instituut points towards a shift taking place in society at large i.e. cognition is increasingly informed by digital processes that have reactivated tactility, haptic and somatic responses to the lived environment, where art has a central role to play, not science alone. It is a paradigmatic shift based on knowledge production that is more encompassing and multi-sensorial (or phenomenological), not simply based on the isolation of the visual sense to the detriment of the others. In terms of presentation and outcomes, the Critical Studies Department is relying on orality and the interplay of all senses within communal spaces of sociability to disseminate new knowledge. This immersive criticism is not simply a consequence of modern practices as one might think superficially, it is rather a combative force that refutes the hierarchising power of modern mechanical processes, industrialisation and Cartesian space. It reflects the electronic age; the revival of pre-modern ways of sensing, the emergence of new modes of sociability and new notions of territoriality and the self.

The works and artists mentioned above are just a sample of what was on offer in the public programme. A full list of presentations and performances can be found here: Critical Studies End of the Year Programme

One thought on “Immersive Criticism”